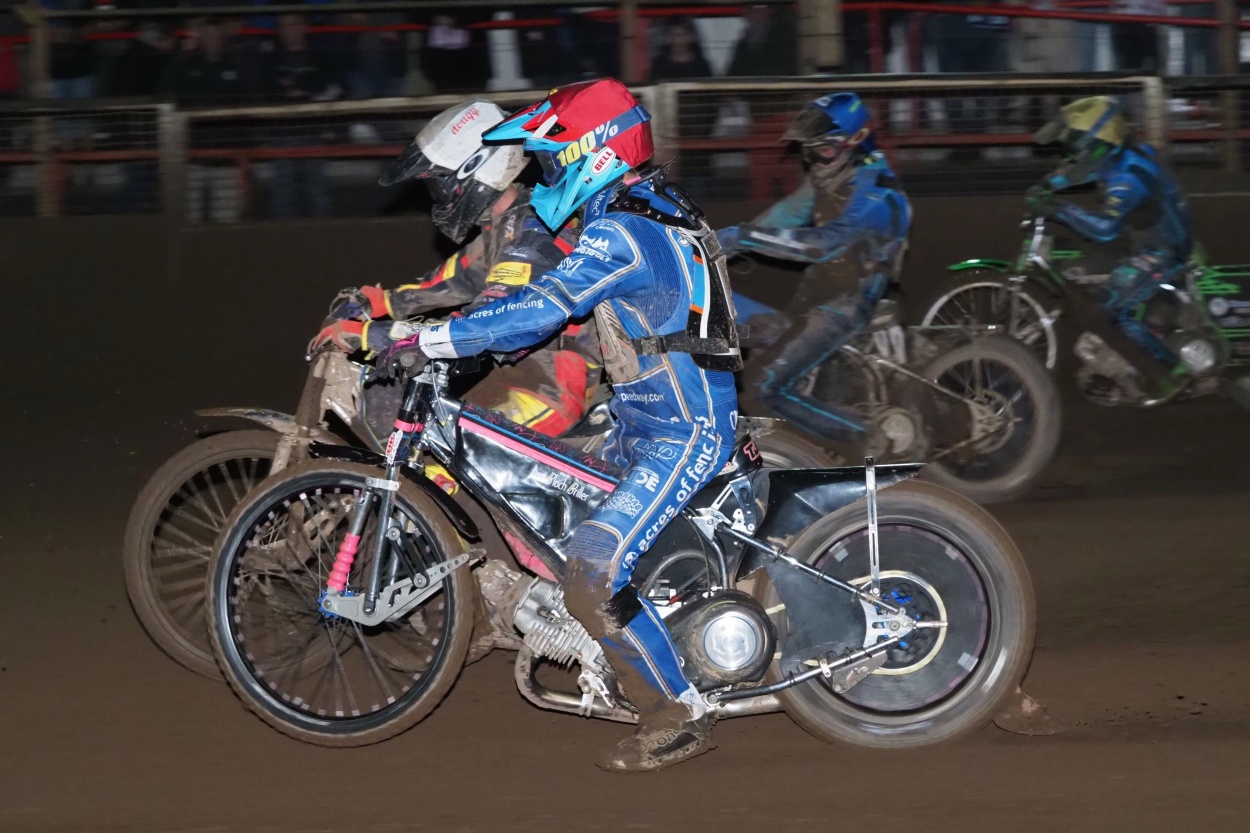 In the backdrop of the bank of wind turbines, the Pirates had the wind taken from their sails as they looked to hasten their confirmation as play-off semi-finalists. A combination of being out-gated and conditions making recovery tough led to them posting their lowest score of the season, a fact that would have still stood even if the meeting, which was abandoned ahead of heat fifteen due to worsening conditions with the rain returning, had run its full distance.

Just one heat advantage from the fourteen completed heats and that was rather fortuitous as heat ten leader, British Champion Adam Ellis, became unseated on the second turn of lap three, allowing tactical substitute Ryan Douglas to lead home Steve Worrall for a 5-1. A result that still left Poole facing a double figure deficit (35-25).

For Douglas, called up to cover Rory Schlein who was isolating after a positive Covid-19 test, it was a second win of the night after he opened with a last place in heat one as the Scorpions got off to the best possible start, deploying reserve Simon Lambert to partner Ellis to a maximum heat gain that really set the tone of the evening.

Lambert made it a swift brace of victories, by cruising to a heat two win after Danyon Hume had been penalised 15 metres for a tapes offence. To the credit of their second guest (covering Stefan Nielsen) Dan Gilkes made a good move on Josh MacDonald to gain second place, restricting the Scorpions to a 4-2.  Worrall did equally as well in heat three to fend off Theo Pijper but Scunthorpe's stand-in, Kasper Andersen, trapped and cleared off in the distance.

Even the excellent Danny King struggled from the tapes, although he did manage to end Lambert's unbeaten run, but it was Thomas Jorgensen who was going to be the maximum man this evening. Although Douglas was not first away in heat five, he had the speed to take him round the first turn and sneak ahead of Pijper but Ben Basso was struggling on his track debut. For the second heat on the bounce Poole were able to avoid conceding points, King and Gilkes filling the minor spots as Ellis was a comfortable heat six winner.

There was a danger that Poole were about to find themselves falling another two points behind from heat seven but a problem for MacDonald on lap three saw him get out of shape and fell right in Cook's path. Referee Jarvis awarded the race, ten points the gap between the sides (26-16).

A little bit of hope in heat eight when Hume and Basso made decent starts, but Lambert showed his guile to pass them both and was soon followed by Pijper. King had a clear lead in heat nine when Gilkes fell at the back. The Kent lad tried his best to clear the circuit but was beaten by the red lights, so King had to do it all again in the re-run.

Poole then had that stroke of heat ten fortune, but any luck wasn't on their side for long as in heat eleven Basso was excluded for closing off the outside when coming out of turn four, the spot where MacDonald was seeking a move. Douglas was able to split the Scorpions in the re-start but time was rapidly running out now for the Pirates to get even the minimum point that would guarantee a top two finish.

After his paid win from heat ten, Worrall banked an outright win in heat twelve but then Jorgensen made a terrific move in heat thirteen to swoop by King and Douglas and despite a bumpy ride he held on to remain unbeaten on the night, as the rain began to fall steadily.

Cook and Hume had nothing to offer against Andersen and Lambert in heat fourteen and with the rain having intensified it quickly became apparent that there would be no need for nominations on this troubled evening for the Pirates.